Villa Tonello is the villa of the Belluno province that better proves a very close relationship of imitation and exchange between the villa and the traditional rural house, a phenomenon tha is not easily seen in other areas of Veneto.
In the moment that nobles or rich owners start to directly manage agricultural works, moving their permanent address from the city to countryside, they carry with them some elements of urban living and they transfer in mountainous countryside the model of a Villa Veneta.

Villa Tonello is a very articulate ensemble of historical buildings, builded in a period of time that goes from XVI and XIX century.


The elements that form the building are placed to enclose a grassy courtyard of irregular shape. The main building, detached, is the one of the Villa, cleary sixteenth, builded on a regular plant, on only two floors with a simple gable roof.
The building looks divided longitudinally in two blocks for the presence of a large front building that contains the portico and the overlaying loggia, linked by the external staircase; behind this, the main block with living spaces linked, in recent times, by an internal staircase. Anyway external and internal areas seem in close relationship.
In fact both ground floor and first floor, we can recognize the same organization and relation between spaces: four big areas linked by a series of central doors with a covered external space that, in the ground floor, is a portico, while, in the first floor, is a beautiful lodge decorated with frescoes. Framed paintings alternating to elegant bearded alto-rilievo describe some moments of Roman history. The work is attribuited to the painter Pietro De Marascalchi from Feltre.
Also indoors, Villa amazes for its beauty and the particularity of its architectonic elements; in fact we can admire two centuries of history of interior.
First floor, eighteenth-century, preserve a rich series of decorations made of stucco that adorn every upper parts of doors and some walls of rooms. In the ground floor instead we can admire the great numbers of styles in which ceilings are made.
At east perpendicular to the Villa a L shaped building holds antique rustics of eighteenth. The building is characterized by a simple and elegant architectural partition of surfaces, it’s linked to the Villa with an archway.
The beautifull octagonal fountain, in the past maybe collocated in a different place compared to the main building, preserves a big arms of Tonello family, dated 1716. 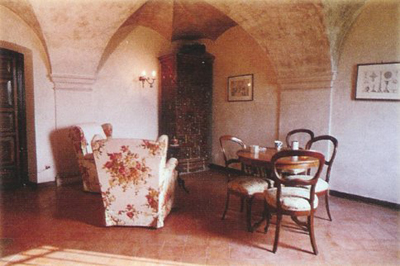 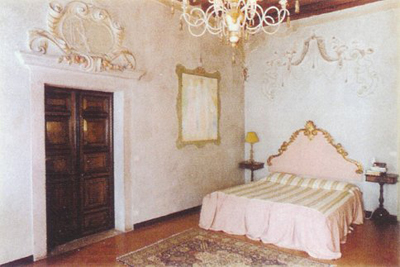 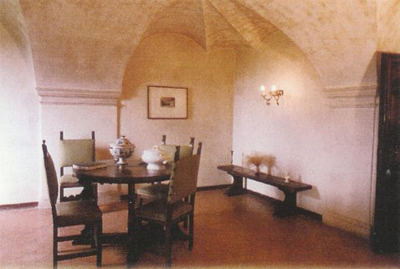 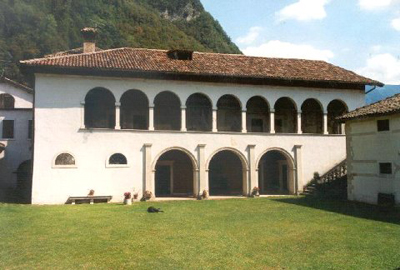