Today no one would think of building a castle as protection against invaders, and even less to do it in a place like Arten, small village at foot of mountain Aurin.
However, if we observe with more attention the surrounding area, we can see how this small village rises in a cross point of important ways of communication. So it’s not difficult to understand why the village had, in antiquity, a fundamental part in the control of valley of Feltre. Seen as a “key point of Canaletto”, only connection to Feltre and stopping-off point for wayfarers that, exiting from the valley of Seren, crossed the bridge called “Caupo” (Caput Pontis”, of which still today we remind the name), the village had to be provided with a defensive fortification.

Still today the most suitable place to build a castle is the top of mountain Aurin, and so had to be a lot of years ago. Confirmation of this hypothesis is given by the great numbers of finds discovered until XVI century; some testimonials comes from “Cronache di Feltre”(annals of Feltre), where Giovanni Bellotti tells about Roman foundations on the top of mountain and some copper weapons. Then the birth of the fortress can be attributed to Romans. As the history want, the name “Arten” would be given by manufacturers of castle that had called that place “Ars” (fortress) hence the name of our village. Mons. G.B. Zanetti, in his annotations on the “Vita del B. Bernardino da Feltre” (“life of B. Bernardino from Feltre”) and the Count Antonio Dal Corno, in some thoughts, are of the same opinion.
Center of defense, the fortress of Arten dominated from the top of mountain Aurin, to control the road of “Canaletto”, a way good defence by other castles as the Castle of Bugnone, that rose in the point in which the valley of Mugnai throws itself toward Feltre, faced up by Castle of Facen, of Transvallulla and of Rosa.

The massive wall of the Castle neither succumbed to the barbaric invasion, but rather were enriched of glory and honour.
Confirmed this the finds of Mr. Luigi Buzzati of Fonzaso that, on 20th January 1875, unearthed two basins and one cup belonged to King Geilamiro. (description of finds)
History teaches us that Geilamiro, son of Gelarido and grandnephew of Genserico, occupied the throne of Vandals in 513 A.D. after removal of the legitimate King Hilderico. He was defeated by Belisario, servant of Roman Emperor Giustiniano, in the battle of Tricameron on 15th December 534 A.D.
That the history doesn't tell us is how some pottery, marked with the brand of the King of Vandals, reached Arten. Surely such precious objects could not be lost on the way and not even, could be carried by a not noble person. That we can thought is that the lord of Arten took part, beside Belisario, at the final battle, and here,maybe thanks to his brave and his bold, deserved a part of booty subtracted to the King…

Importance of the Castle reached its top on the VI century when its decline started.
In the following years the city of Arten, for the will of King Alboino, was relocated from the plain to hill and stopped to consider Castle as a part of itself. In the same years the Castle of Fonzaso was builded, that rose in the jurisdiction of Arten. Fonzaso started to get stronger at the expense of Arten (It’s on this time that was born the hostility between people of Arten and Fonzaso?!). Despite this the village continued to grow, thanks to the deviation, due to natural or human causes, of the torrent “Cismone” that deviated toward Brenta river. 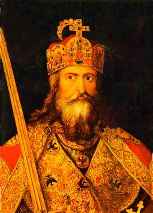 After the defeat of Lombards, Charlemagne, seen the city of Feltre depopulated and devoid of the ancient splendor, decided to repopulated it with castellans of those areas. Needless to say that, this decision, accentuated the decadence of the Castle of Arten become similar to a manor, a noble residence inhabited only during autumn.
Due to the great number of castellans, a lot of towers were builded in Feltre, fact that contributed to restore glory to the city. One of these towers, in the district “Paradiso”(heaven), was owned by “Fonzasio” family that transferred there all the weapons that were in the fortress of Arten, now completely defenseless.

In the years of peace that followed, the Castle of Arten saw again its castellans that, as just happened in the past, showed their brave answering the call of the Crusades.
Giovanni ed Onorio D’Arteno were the first to go to Jerusalem led by Giovanni Da Vidor, but many others followed with the second Crusade. Between them there was also Azzo D’Arteno who, as Giovanni De Bellati reminds in "Siloe", found:"…the tomb of his ancestor Onorio that Giovanni, brother of him, had made before to leave."

During internal wars that devastated the city of Feltre in the XII and XIV century, we can find also castellans of Arten. Differently from other families that sided or with Guelphs or with Ghibellines, castellans of Arten changed frequently their flag, but despite this, they showed also in this time their brave. We know in fact that Giovanni from Arten militated in the ranks of Emperor Federico II, from which had deserved, thanks to his valor, privileges and awards. Onorio of Arten fighted valiantly against Ezzelino da Romano in the spring of 1248. In the conspiracy against bishop Adalgerio Villalta, failed due to a betrayal, there was a good number of people from Arten; and many others were concerned to defend, in Feltre, the Guelph Prelato.
Between XII and XIII century, the Castle underwent numerous assaults, conducted always by Guelphs, but was always be able to fight them off. Foreign invasions and political controversies were not enough for the Castle walls that had to face also the feelings of love. During the night of 18th January 1296, Onorio D’Arten, ready to marry Giselda the day after, daughter of Floro da Foro, was assaulted by Pitro Muffone that came out from woods “delle Gazze” by surprise. Pietro in love with the bride, had already tried to win her heart, but failing he had decided to take up arms. Defeated, he retreated and died three days after due to injuries sustained during the battle.

At the beginning of XV century the Castle of Arten was fallen into disrepair.
Walls now smashed bore the marks of all interminable battles that had seen and that had made great the name of the fortress and its castellans.
The final blow has been given when, on order of “Repubblica Serenissima” (republic of Venice), were broken down all castles around Feltre.
The era of Castles was ended.

On 20th January 1875 a traveler, present at the disinterment of basins of King Geilamiro, understood the glory, the splendor and the importance that had the fortress, wrote: 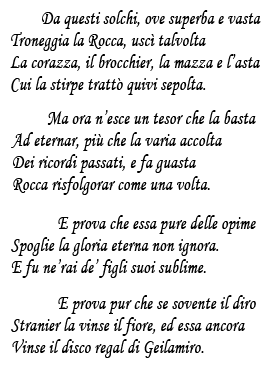